Many people have a beloved pet in the family, whether it be a cat, a dog, a hamster, or just about anything. They bring us love and companionship and a sense of responsibility. With that responsibility comes the choosing of a name for our new furry family member. Whether they’re named after past family members (Lucy), famous characters (Penguin), or random objects (Oreo), cats in particular seem to find themselves in a world full of interesting names. I’ve looked up the top 5 cats names and what seems to be the reasoning behind their popularity.

Now this one is a no brainer. Some people might say it’s because it is such a pretty name, but the vast majority have gotten this name from a little book/movie franchise called Twilight. With how much popularity this series has gotten, it’s no wonder there are tons of cats out there sporting the same name as the main character. 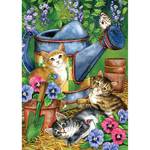 Unlike Bella, which only became a popular cat name over the last couple years, Tigger has always been close to the top of popular cat names. Winnie the Pooh has been an iconic household name nearly a century. Of course Pooh’s fun-loving, springy-tail tiger companion is the one who first brought the name Tigger to us. Ever since cats with orange stripes seem to be given his namesake.

I am going to chalk this one up to just being a pretty cat name. The name brings words to mind like “dainty”, “cute”, or “graceful”. All of which can be characteristics of our loving pets. This name has taken over in place of the name “Princess” which was a much more popular cat name in the 90s.

Admit it, sometime in your life one of your friends had a pet named Shadow. Whether your cat is black or smoky grey, Shadow is always one of the first names that come to mind. The name makes us think of our cat as a quiet stealthy ninja who sneaks around our house at night to attack bad guys and the occasional shoe. And if none of these things are true, at least he’s the coloring fits the name.

This is the male version of the name Chloe. It’s just one of those names that seem perfect for a cat. Now this name could be used because a person like Oliver Twist, or maybe the little orange cat from Oliver and Company, or maybe it’s because they like the nickname Ollie. There really isn’t a bad name for a cat (except maybe Chubtastic Meow-Meow), but remember no matter what name you give your cat, they’re probably not going to answer to it anyway. And even if you do end up giving your cat an absolutely ridiculous name, they’re your cat, and they’ll forgive you eventually.