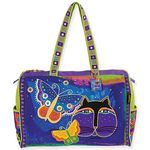 Describing Laurel Burch's designs is not something that would take a rocket scientist to do. Laurel’s career began in the 1960s, when self expression and awareness of the human mind was reaching it maximum level of influence. This had a great effect on Laurel and the way she could create her art objects.

The category that many art critics place Laurel Burch and her creations would be impressionists. While you can distinguish the objects in the art, it is not how they would appear in the real world, especial the colors Laurel would paint them. This is one of the things that have set Laurel’s art objects apart from most other in the world. She would use soft, comfortable animals and other items in the art that were colored with a multitude shades and patterns.

Laurel Burch created her art for much of the same reason many artists have done so. This is so they can express themselves in a visual manner. Many artists use this as a portal so they can express their feelings in a way that is safe and imaginative. Some show signs of pain or anger they have experienced. Laurel did not use her art in this fashion, to express her pain. She did it only to bring joy to the world.

As with all things in this world, each individual express themselves at the way they react to pain, pleasure joy and happiness differently. For Laurel Burch, her art was a way for her to find the happy place she had created. This is how Laurel dealt with the crippling pain she has had to endure all of her life. She was born with a rare bone disease that would cause them to harden and become brittle.

Laurel Burch had to be careful with her body her entire life. She would break bones by completing simple task such as eating or walking. She had even broken bones because someone would inadvertently bump into her. Each time she would be sent to the hospital to have the bones reset and a cast placed upon her body. In her lifetime she broke over 100 bones. Each one needed time to heal. This is the reason for her happy place, so she could go to keep her spirits up.

This is the magical place where all of the bright colors and designs were imagined. When she had recovered, she would then infuse these ideas into her art. In the early days all she made was jewelry. This was the easiest and least expensive to make, since the materials were free from items she would find. In time, she had money to purchase materials so she could create her art that made it easier for her to expand her line of items she would sell.

The main animal Laurel Burch placed in her art was cats, but she also used horses, butterflies and fish along with countless flowers. These would then be colored with a wide variety of bright colors in happy designs that would bring a smile to anyone, even when they were in pain or full of sorrow.