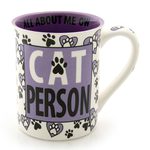 We all know that Cat People are a great group of folks to be associated with, but in that huge group of fun and loyal people, are their different personalities that are apparent?  Our totally unscientific observation of this happy assembly has resulted in a compilation of 4 main categories that Cat Lovers fall into.

The Cat Owner is the tolerant owner. Typically, this is the person who inherited a cat from a failed relationship or is the reluctant spouse of the true cat lover who is in the house.  They are mere tolerators of the cat, and the cat is totally indifferent to the presence of this person, barely giving him or her any recognition besides a swipe now or then to remind them that they are on a lower level than the cat is.  Viewed from the cat's perspective, the Cat Owner is a slave to the feline needs and whims, to be tolerated - barely.

Cat Momma is typically a woman who is a cuddler, and loves having the cat draped across her shoulders or stretched on her lap snoozing together in a purring bliss.  She enters a room, and immediately calls for Kitty, snuggles with him while whispering about her day into the cats ears. Constantly scratching under his chin or between his ears to the delight of the Kitty.  Viewed from the cat's perspective, the Cat Momma is heaven sent to earth. She is totally subserviant to the cats whims: what the feline fancies, she will fulfill.

The Cat Therapist is similar to the mother of a fun teenager, equal part love and frustration. While wishing she had a different life's role, she will place on the cat her own goals and foilables, and get frustrated with the cats behavior, while excusing to all the playful errant ways of the little one.  A staunch defender of all things cat, she is a bundle of frustrated tolerant energy. Viewed from the cat's perspective, the Cat Therapist is someone to be toyed with. The cat will maintain an attitude of detached mischievousness with a mouse placed in just the right place, a twitch of the tail over that cake that is on the counter or a bounding up on the sleeping human in the middle of a nights rest.

Cat Woman is a jump off of the BatMan character, where the owner is sleek, detached, and superior. This Fashion Feline loves the sleek mysteriousness of her cat and tries to emulate the strut like a model walking the fashion runway. Viewed from the cat's perspective, this Cat Woman is her twin, haughty, arrogant and perfect, they compliment each other with their haute look.