Cat lovers are very special people who generally are very caring and helpful to others. By having a cat as a pet, it is not like most other pet owners. The feline has a mind of its own and does not consider that their owners possess them. In most instances cats look at the people they live with as the person who opens the cans of food for them.

Most people are behaving similar to those around them. This is includes cat people. Many of them are quite and do not disturb others just as cats are. It is why the saying “a bull in a China shop” is not “a cat in a China shop”. Cats do not knock things over or make a lot of noise. They are quite creatures, mainly because they are always on the prowl for entertainment or a victim like a mouse. 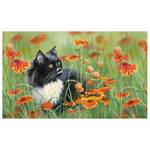 Cats and their owners are mostly observed relaxing and loving to cuddle. To no surprise most cat lovers are female with their preference to stroke a soft furry animal that will purr constantly. It is a way of showing love that both are known for.

Owners of cats have another similar trait as their pets. Many of them are solitary for long periods of time. A cat person is not anti social but enjoys relaxing alone with little to no interruptions or disturbances to their peaceful existence. These are not the types of people that rant and rave on a constant basis. Peace and serenity is part of their daily lives and they enjoy it.

Around the work place most cat people are very hard workers and enjoy helping others when called upon to do so. They help to bring that serenity and peace to the work environment that they enjoy so much. Confrontation with others is not on their agenda and is generally avoided at nearly all costs. They can fight and will if cornered or confronted with no means of escaping. This is when the true animal comes out and they are known for being ferocious. Just like cats, cat people take it personally if confronted and will defend themselves as if their life depends upon it.

For the most part cat people are very nice and peaceful to be around. While they can be moody as most cats are, the general population loves having them in their vicinity since they know confrontation is not in the forefront of their thoughts.