How did Laurel Burch Start Her Career in Designing 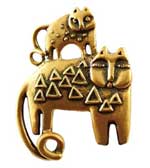 How did Laurel Burch Start Her Career in Designing

How did Laurel Burch start her career in designing is not how most other artist begin their careers. She never took a single art class other than what all children go thru in grade school. You know the type, the teacher instructs the class to break out their crayons and make a visual representation of an event of their homes and families. It was less of art instructions and more of a time filler from the teacher. This is all the instructions Laurel received in her formal education in terms of art.

For all practical purposes, what Laurel Burch did as a child would not be considered the beginning of a career. It is true that she would make creative objects while in the many hospital visits she had to endure. The reason for these lengthy stays in the hospitals was due to recover from the splintering of her bones that were caused by the rare bone disease she inherited. What is true is these simple gifts did bring joy to the other children in the wards. It also showed the promise Laurel had in the area of creating original art works.

Laurel Burch left her parents home at the age of 14. Until she turned 19, she mainly lived in other people’s homes doing chores to earn her keep. This pattern ended when she met Robert Burch at the age of 19. Robert was a street jazz musician and eventually married Laurel. She went on to join him on the street as a musician as a source of income. This all ended with the divorce when Laurel was 20 in 1966. By then she had already given birth to her daughter and was now on welfare as a single mom.

Living on welfare is not something anyone wants to do for any period of time. Laurel Burch was no exception to this. To help her keep busy she would collect loose items she would find laying in the street. This would include metal, wire, bones and other assorted materials. She would then fashion them into jewelry of her own designs. This is when the real career of Laure Burch and her designs began.

At first Laurel would just give the items away to help make people happy. She then realized she could be making money producing this type of goods. This is when she began selling her jewelry on the streets of San Francisco. In time the store owners in the area took notice of her and her jewelry. This was the beginning of others selling her creations for her.

In time and with help from investors, Laurel Burch’s creations have spread around the world. Today there are many places that have obtained licenses to produce her art work. This includes jewelry, scarves, purses and posters. All of them use an original Laurel Burch design or designs in the products they produce. Her designs are so popular that licenses are still being sold after her death.