Who was Laurel Burch

Who was Laurel Burch 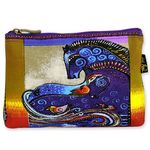 Who was Laurel Burch is something many people asks when they are admiring her unique style of art. The question arises because of the way Laurel has injected so many bright colors into her work that makes people happy without making the pieces to appear gaudy.

In the early stage of her life, Laurel Burch painfully found out she had inherited a bone disease from one of her parents. This disease caused the bones to harden to the point that they would snap like twigs when too much force was applied to them. As an example, she broke bones in her foot when she was a child while just walking.

It was the long periods of pain and recovery that initiated the need for Laurel to find a way of coping with what she was forced to endure. This is when she explored her mind and found a happy place she could retreat to when life become to unbearable to face. She filled this place with happy images and bright colors to help you find happiness and in her solitude.

This is the place Laurel Burch drew from when she would make her creations. The object of art, that can from here, began when she was very young and in the hospital with other children recovering from other illnesses. Laurel would make little items from the material she would find around her and give them to other children. This would bring joy and happiness to a child who was suffering.

That was the true beginning of Laurel’s art, yet she did not know it yet. As time passed her home life became too much to bare. By the age of 14, she decided moving out on her own was the correct path to take. She packed her few cloths into a paper bags and set out north to find her destiny.

As she walked along, she would look for tasks she could do like cooking, cleaning and babysitting in exchange for food and a roof over her head. To help keep her mind sharp and focused, she would again pick up material she found around her and begin to make jewelry. Since she had no money, it was the only means she ad at acquiring accessories for her attire.

In time she ended up in San Francisco amongst the flower children. There she would at first just give away her creations. In time she realized she could make a living at fashioning jewelry from old coins, buttons and odd pieces of wire and selling them. Her work became so popular that many of the local shops began to carry her line of creations. This is where Shashi Singpuri found her. He was a business man that gave her the financial backing to have her art creations manufactured. This is what lead to Laurel Burch becoming the first American to use Chinese manufacturing for their products. This was in 1971.

From that time on, Laurel Burch’s creations and influence grew to the global phenomenon it is today. Laurel did pass away in 2007, but her influence on the art world will never fade. She transformed her pain into bright simple creations that bring joy to whoever seen them and became one of America’s greatest artists.